It is presumed that the chestnut 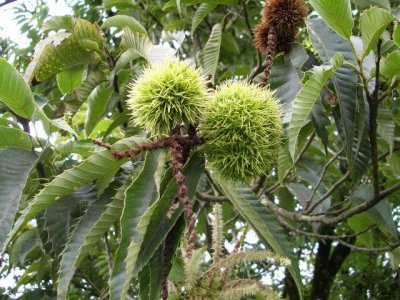 comes from Asia, the Balkans and the Caucasus, following the history of western civilization for more than 100 thousand years. Along with the pistachio, the chestnut constituted an important caloric contribution to the prehistoric man who also used it in the feeding of the animals.

During the Middle Ages, in monasteries and abbeys, monks and nuns frequently used nuts in their recipes. By this time, the chestnut was roasted, having even become one of the main farinaceous of Europe.

The term chestnut tree is cited in a document in 960 AD long before the formation of Portugal (1143). The chestnut was, along with the acorn, a common food in the portuguese diet, until the XV/XVI centuries, when potatoes and corn were introduced in Portugal.

In the seventeenth century, the chestnut was considered one of the most important ingredients in the portuguese diet, it even took the place of the bread, which was scarce.

Castanhas sold in the truck

The “castanhas” (chestnut) is not anymore a necessity in the country diet, but still very nice to eat those nutritious nuts when walking around Lisboa, for example. When the chestnuts trucks arrive on the streets during the autumn and winter the city gets an extra snack alternative, but as well makes the atmosphere of the city very nice with the foggy air from the ovens and the nice smell of nuts announcing the cold days in Portugal.