People ask us all the time if the bridge 25 de Abril is the same as the Golden Bridge in San Francisco. And because in Lisbon there is a monument, Cristo-Rei, that is similar to Cristo Redentor of Rio de Janeiro, we don´t feel that those questions are nonsense.

Can you guess which one is the Lisbon one?

The first idea about building a bridge linking the city of Lisbon to Almada, on the left bank of Tejo, dates back to 1876. At that time, the engineer Miguel Pais suggested that its construction was made between Lisbon and Montijo, not Almada.

Later, in 1888, an american engineer, proposed to the bridge to be made between Chiado and Almada. Only in 1953 that the portuguese government created a commission with the aim of studying and presenting solutions on the issue of rail and road traffic between Lisbon and the south bank of Tejo. 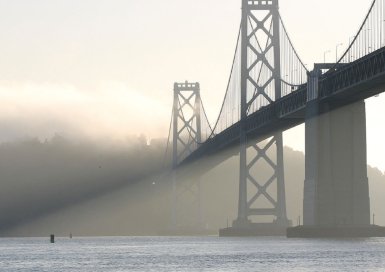 The november 5th of 1962 the construction work started. Less than four years later the bridge over Tejo was done. The cost was around two million and two hundread thousand portuguese contos, corresponding, today to close to 11 million euros.

Fact is people are almost right because was in San Francisco that the inspiration come, from the Bay Bridge. The lisboeta bridge was constructed, however, by the same company that made the Golden Gate.

After the revolution, the bridge Salazar, was renamed bridge 25 de Abril (25th of april). A very special date for Portugal…but that is another story.