The chouriço or chouriça are the traditional portuguese sausages made of pork, fat and otras cositas mas. The spices that made the taste soo good varies by region and producer of this traditional portuguese food. When the sausages are filled up, they are then hung in the smokehouse individually, when they get ready they have the shape of a horseshoe. The casings can be natural or synthetic, made of natural source materials.

Alexandre Dumas, in his book, Grand dictionnaire de cuisine from 1850, says: “the chouriço pork has, in any case, all the bad qualities of that animal, and the way is prepared makes it even more indigestible.”(lol). We highly disagree with this genius writer. Actually we recommend you to try. The best is to grill in ceramic pots. 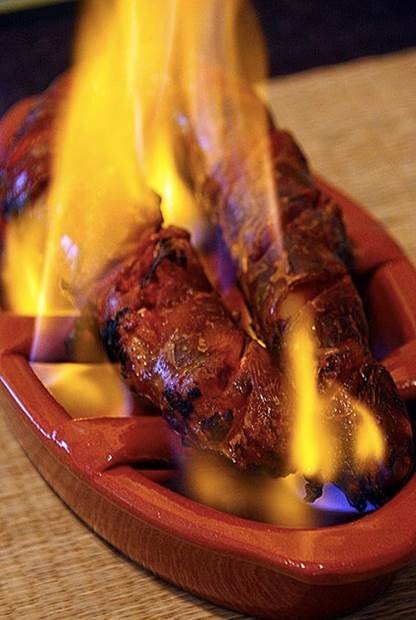 In the Borders and throughout Interior of Portugal, pork has always had a very important role in the economy of the local people, where almost every family raised their pork for their livelihood.

The pigs were slaughtered in the so called “dia de matança” (day of slaughter), a feast day for the whole family and best friends. On the same day, the people already start to eat the meat and prepare some meat, blood and guts for the manufacture of chouriço which then was consumed trough the rest of the year. While the men of the house were responsible for cutting the pork and salting hams, older women prepared the meat and seasonings to manually prepare the chouriços,  black pudding, farinheiras  and transfer its secrets to the new generations of the family.