The earthquake of 1755 was a terrible tragedy that changed the people and the history of Portugal forever. This is a fact. But because the earthquake, a city underneath the city was found. The reminiscence of the romans in Lisbon

This Roman structure, discovered in the basement of downtown Lisbon, in 1771, following the 1755 earthquake and subsequent rebuilding of the city, has been, over time, of multiple interpretations for their original function.

Currently is believed that the galleries were a cryptoporticus, architectural solution created to make possible construction in sloping zone and geological areas with little stability, a horizontal support platform for the construction of large buildings, usually public, such as city Forum, which would have been supported by this cryptoporticus.

The discovery of an inscription to Esculapio, god of medicine, on behalf of two priests of the imperial cult and the Municipality of Olisipo, engraved on one side of a limestone parallelepiped block dated century I B.C., currently at the National Museum of Archaeology, may be a confirmation of the public character of this building. At the beginning of the century XX, these galleries were known as the “Conservas de Agua da Rua da Prata” to be used by the population as a cistern.

Their constructive characteristics, type and associated materials refer us to a building dating from the sixth century. B.C. and the  first century. A.D., contemporary of other public buildings of the Roman city of Olisipo. Open to the public on a regular basis from the 80’s is possible to visit only once a year due to water accumulating inside the galleries. Pumping this water more often, in addition to being a lengthy process, could jeopardize the conservation of the building based on this Roman structure. Access to the interior is via a trapdoor located at Rua da Conceição. 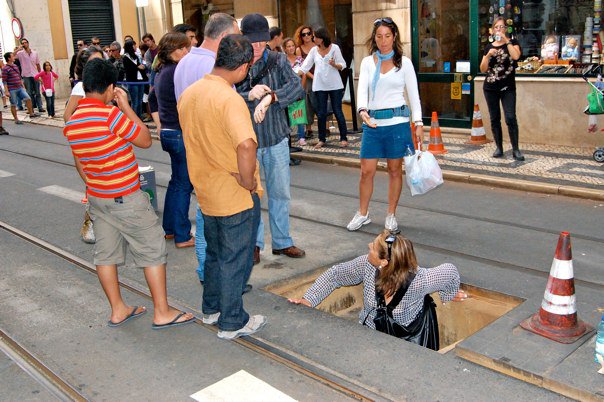 If you are interested to visit you have to run. There is limited tickets per year. You can try on this website.