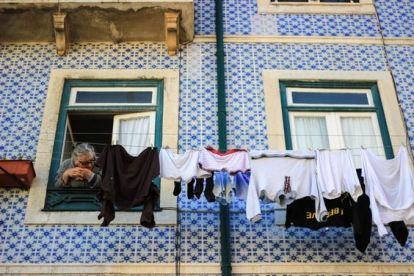 place, the fado was born. Maria Severa Onofriana, first Portuguese fado singer and ultimate expression of fado lived there and close by her house, in the twentieth century, was born who was considered the “Mouraria Fado king”, Fernando Mauritius. Mariza, the most famous international contemporary Portuguese fado singer, grew there too. Soo Mouraria could be seeing as a place historically and culturally important to Lisbon and Portugal.

At present, the Mouraria is considered one of the safest neighborhoods in the capital. Is a meeting point for people of different cultures and at the same time, a place that keeps alive their ancient folk traditions, as confirmed by the existence of several fado houses, bars, taverns and cultural and sports institutions alongside  Chinese and Indian shops, among others. But in the 90´s and 00´s the situation was not very nice. But with government, habitants and associations as “Renovar a Mouraria” (renewing Mouraria) the neighborhood got a different atmosphere and now is flourishing with art and cultural bars, vegan restaurants, fado nights, walking tours and the best is that still very local essence. 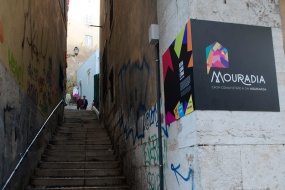 A group of friends chose decided to make a association to make the area better again (not like Trump style) and started talking with the locals asking for signatures and that is how started in 2008 the association Renovar a Mouraria.

The association has a incredible acceptance by the foreigner population that lives in Mouraria (people from Bangladesh, India, Brazil, Angola, Moçambique, etc) helping them in soo many different ways that make official immigration offices looks like a bureaucratic hell. 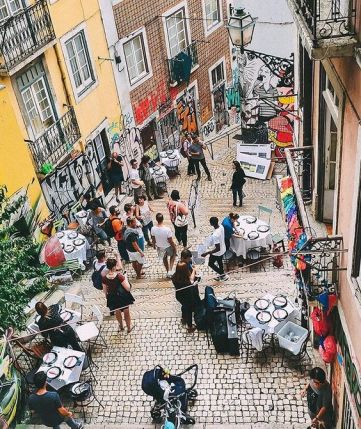 The locals get fun activities as yoga classes, ballet for children, Latin dance and guitar; tapestry workshops and illustration for families, among others, always with different price levels for residents and workers. Alternative therapies through the Health for All project.

If you wanna know more visit their website Renovar a Mouraria or pass by their cafeteria because every night they have a different activity going on, music, party, poetry reading, world food dinners made by locals who find here an opportunity to enhance your family budget, vegetarian dinner, film cycles, watching football games, karaoke, birthday parties, etc.

Having a drink in their bar is just not fun and a local thing to do but as well help them to keep doing the great job of trying to integrate the immigrants with the Mouraria family!